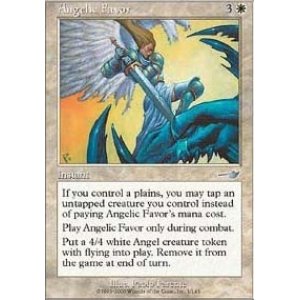 Ability Text:If you control a Plains, you may tap an untapped creature you control rather than pay Angelic Favor's mana cost.
Cast Angelic Favor only during combat.
Put a 4/4 white Angel creature token with flying onto the battlefield. Exile it at the beginning of the next end step.

There are no reviews for this product.


Your Review:Note: HTML is not translated!

Enter the code in the box below: