Hello everyone, you could be mistaken when reading the title to this article that I am writing a strategy article, I am however, going to take on a different challenge by taking an Intro Deck and replicating the path of a new player developing into something we can take to an FNM with a realistic chance of doing well.

FNM still tends to get lots of home brews and not everyone plays the latest net deck, as such the requirement to play with the most powerful cards in the format is reduced. I don’t intend to build a rogue deck to take on PTQ’s but you never know what happens with Magic. I would also like to stay true to the Intro decks core values so the deck will be White-Blue, aggressive and will be built with Odric, Master Tactician in mind trying to utilise Knights and Soldiers where possible.

This is the first part of the article and it will cover the Intro deck, the additional contents and where we are going with the deck. I don’t expect the deck to be competitive until rotation in October and as such will not be wasting my time acquiring cards that will rotate out. I would also like to use under the radar cards if possible to avoid having to buy the really expensive cards like Geist of Saint Traft.

One of my goals for this article is to allow for new players or those on limited budgets some helpful hints on how to develop a card pool and a deck. Much like with the trading game pack to power I intend to use cards from the Intro deck, prizes and a reasonable weekly magic budget to support the deck. I want this to be a community article so please feel free to comment or contact me direct with any suggestions. If I use your advice I’ll make sure you are mentioned in the follow up articles.

So how to get the deck better, there are several options to consider.

2.. Buy another theme deck to double up on the cards

3.. Buy a different theme deck to support the deck

Of course during the course of play with the deck we may well win prizes which can be added to the pot.

Where are we going?

So what are we going to do with our pool, we have enough cards in the two boosters to create a sideboard but can also look at whether some of the cards in the boosters can make the main deck.

Ideally I would like to improve the mana base, whilst Artic Aven needs Plains to become more powerful adding four Glacial Fortress is a priority for the deck and as are they are in their fourth core set print run and been in other products they should not be hard to acquire cheaply.

The second area is can we build up the creatures that we do run, Honor of the Pure which is key in many white decks is rotating out of the set, that leaves us Favorable Winds and Intangible Virtue are your main options unless you look at creatures. Whilst we could go with spirits and Drogskol Captain this has been done before and just seems like adding Odric to an established tokens deck. Angel of Jubilation is a cheap option but vulnerable to creature removal.  Captain of the Watch has a pump effect as well as bringing in guys so may yet be an option, especially as he was in M10 so is currently priced as a bulk rare. 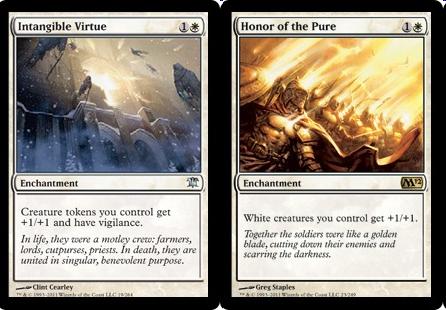 Who else can we bring in to win, Talrand, Sky Summoner could work along side Master Odric with all the drakes he could summon but I feel he would be better suited in a blue rather than white centric deck. Yes, we have both Favorable Winds and Intangible Virtue which we could add to support even bigger soldiers from Captain of the Watch with flickering effects but we are potentially getting very top heavy on casting cost.

Silverblade Paladin hasn’t seen much play but has plenty of upside, he could make an interesting three drop, also has he was a buy a box promo supply isn’t too bad either.

Chromaton looks like a slow creature which is far from a Steel Overseer.

Silvercoat Lion is really just another bear and hopefully we can get something better, Nearheath Pilgrim appeals as it could have soulbond synergy with Silverblade Paladin.

Courtly Provocateur, I am not sure on this sand as the deck is chocker with three drops, I think I would prefer another Artic Aven.

Crusader of Odric looks nice, has flavour with Odric but can’t help but think it is too vulnerable to be the backbone of a constructed deck.

Then looking at out boosters we have Void Stalker and Serra Avenger. Whilst both are rare cards and the Avenger holds some value just due to its name I cannot see either having a an impact in the deck, I would rather use these as bait to get some more synergistic trades.

So how does the deck play?

The deck is sleeved up and comes along to the Grimsby Magic nights, a couple of people have borrowed it from the original brew and including my modified versions. So far it has had really limited success from mainly the play skill of players running the deck, despite trading away the off colour common cards and uncommon cards to bring in some solid replacements. We have an extra Captain of the Watch and a Serra Angel as threats.

After a few games myself I do feel the deck could utilise removal from a full set of Oblivion Ring’s, maybe even Fiend Hunter. The lack of one drops is noticeable and I am Pondering over how I could up the instant and sorcery count to fit in Delver of secrets’ though as they would have potential to be strong.

Hope to read your opinions and suggestions.

Thank you for reading,

An Update to Gruul Adventures, by Freddie Barber

B&R Response: A Review of Standard After Field of the Dead

Theodore Southgate - August 2, 2017
0
The Top 10 Best Elves In Magic: The Gathering's History Following the success of my recent article discussing the top 10 goblins in Magic: the...

5 Things You Need To Know Before Using MagicCardMarket, by Theodore...

12 Common Cheats In Magic: The Gathering And How To Prevent...

The page your are looking for could not be found or has been removed.

MTG Standard Decks on a Budget by Brodie Abbott

Player Submission - May 17, 2013
1
There’s no need to spend so much money. The power level of a deck is not decided by the price tag. This article is my take on budget Standard and I'm hoping to make this a weekly or fortnightly thing. I want to get ideas from the Magic Community and create an article that will help new players get started without having to invest massive amounts of money in decks.