Before I go into my experiences of Innistrad so far, here is one last bonus M12 deck.  I wasn’t going to write about it, but Rob wanted to see what it was: 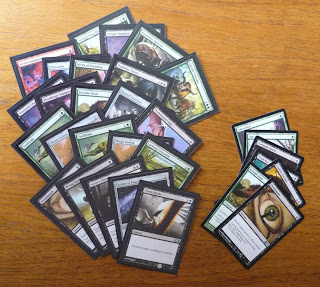 I was still suffering from the dregs of bronchitis and coughing quite badly that evening, but I’d dragged myself down to the pub to draft night because I was missing the experience (and if I’m well enough to go to work, I must be well enough to go out and play, right?).  This draft went completely off the rails, and as you can see the resulting deck did not look good at all.  I started off heavily in black, then the person to my right decided to move in on it, so I ended up in somewhat of a mess – my Consume Spirit was now going to have to sit on the bench, and I was desperately short on cheap creatures.  There were no webs to draft for my Arachnus Spinner, and I opened nothing exciting in pack 3 apart from the rare, Grim Lavamancer, but at least I did have some colour fixing to allow me to splash it.

Things were looking bleak when deck building.  In desperation I went all-in on the very high risk Thran Golem + Trollhide strategy (to be fair, it did work in the first game, but never happened in any others).  Somehow I went 3-0 with this deck, a combination of playing well, knowing all the tricks of the format and top decking like a goddess.  Oh, and that little crocodile was the bestest crocodile ever as all of my opponents were playing blue.  I remember feeling completely knackered by the end of the evening and felt like death, either playing magic had become physically exhausting or I’d drunk too many J20s… or perhaps both.

So, let’s leave M12 behind and head to pastures new – the scary horror plane of Innistrad.  I went to the local Oxford Prerelease which was held on the Sunday, still with a pretty nasty cough.  At least I was actually feeling a lot better even though it didn’t sound like it!  This was my sealed pool: 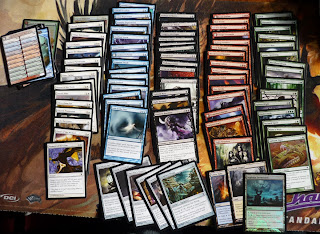 It didn’t look too bad at all, and I was immediately drawn to the white cards as they featured 4 removal spells (2 of which are creatures), and Mentor of the Meek who looked pretty bomby to me, as drawing cards in sealed is exactly what you want to be doing.  Red was the next most appealing colour because it had more removal in Brimstone Volley and Skirsdag Cultist, and another rare in Kruin Outlaw.  I wasn’t sure how good werewolves were going to be, but her other side looked pretty awesome.  The werewolves also synnergised quite nicely with other things in my deck like the Mentor of the Meek, because when they are cast they trigger him, but then can become larger later.

I had some interesting looking blue cards too, and initially this is the deck I put together: 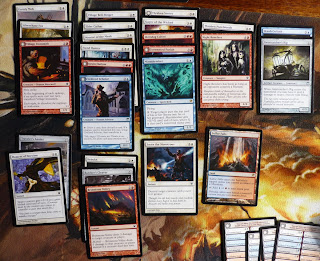 When it came to trying to work out the mana base for this however, I realised that things could go terribly wrong with so many double red and white casting costs, and most of my deck was looking to be on the more aggressive side.  So in the end I cut the Mindshrieker, Civilized Scholar and Skaab Goliath and put in 2 Riot Devils and a Nightbird’s Clutches.

I went 4-2 overall and most of the games were fun and interactive.  I was pleasantly surprised by the werewolves, although I think they are overly mean against opponents who are already behind in the early game because they don’t have a 2-drop.  I found Wanderer’s Twig – excuse me – Traveler’s Amulet to be very handy at sorting out the double coloured mana costs.  Mentor of the Meek was disappointing because I only drew him when I was having mana shortages, he never drew me a card.  I’m sure this was unusual however, so I will not be biased by my negative experience into underrating him.  In fact, in one game my opponent Anthony had a Menor of the Meek in conjuction with Lantern Spirit, which was a pretty awesome card draw engine in the late game.

There were two games however which I did not enjoy at all (and not *just* because I lost).  One was game 3 against James, who cast Mindshrieker on turn 2, then proceeded to mill me (which is most definitely wrong when you have not one but TWO Skaab Ruinators in your deck).  He played nothing else, just kept activating the Mindshrieker in his attack step and hit an almost-constant stream of my 3 and 4 drops, only hitting a land once.  He killed me while I had 5 land in play and the Rig and 6th land in hand, deciding to forgo holding up mana for his own Rebuke, which would stop my attack back with Terror of Kruin Pass (Kruin Outlaw’s other side) from being lethal.  A complete gamble, and I really do not enjoy being killed in such a statistically unlikely manner.

I also did not enjoy being punished for keeping a hand containing Fiend Hunter, Rebuke, Smite the Monstrous and some land.  It was again game 3, and my opponent made Geist of Saint Traft on turn 3.  I failed to draw any of my other creatures, and he didn’t even play another creature which would have allowed me to get my Fiend Hunter onto the board to stop some of the bleeding.  I was frequently annoyed by the keyword Hexproof in M12, and here it is again making the game un-interactive and completely un-fun.

I did a draft after the sealed had finished as I was still on a new card excitement high.  That rapidly drained away during the next hour though as hunger and tiredness set in.  I drafted a green black deck which was an unfortunate mish-mash of some werewolves, some morbid cards and some sorcery speed removal spells.  This did not work well as the werewolves wanted me to be casting instants in my opponent’s turn, and my morbid creatures wanted me to cast cheap removal like Dead Weight to kill something and then cast them afterwards (thereby playing 2 spells and transforming my werewolves back again).  I also apparently should not have been in these colours as they were exactly the same as the person feeding me, despite my backwards-signal of 1st pick Mayor of Avabruck, and then taking Sever the Bloodline passed to me as my 2nd pick.  I went 0-2, then dropped to go home and get some dinner as it was well past 9 o’clock.

In the next blog I’ll go through the 4 drafts I’ve done since the prerelease and try to make sense of the mixed results.  This will have to be written another day however, it’s getting late and I’ve got to get up bright and early to go to a PTQ tomorrow.  Wish me luck!

Thanks for reading, and thanks for sharing,

Grant Hislop - January 23, 2013
0
Now that it’s January, that means a new set, and with that means a series of semi-incoherent ramblings about said new cards.