A week or two before the store qualifier I was wondering what to take along. I fancied playing with Grand Architect and some big powerful artifacts, so I looked for some interesting deck lists online as I didn’t have time to brew a deck completely from scratch. I built a list that played lots of Mycosynth Wellspring and Ichor Wellsprings, Spine of Ish Sah and sacrifice outlets, but after goldfishing it a bit I came to the conclusion that it was just too slow and uninteractive. A few days before the event I came across this list which used Heartless Summoning in addition to the Grand Architect. It looked like great fun, so I went on a mission to borrow all the cards for it. I tweaked it a bit, and this is what I took to the event:

Round 1 – Mikey P with Mono Red

Game 1 – I stabilised at 8 life with a Heartlessly Summoned Platinum Emperion in play. He managed to kill it with Hero of Oxid Ridge and Brimstone Volley, but this left Mike with nothing on the board and no cards in hand, and he died to my other creatures.

Game 2 – I dealt myself the first two damage of the game and it wasn’t even my turn yet – I Mental Misstepped Stormkirk Noble. I made a Heartless Summoning and free Myr Superion on my turn 2, which defended me and my friend Tezzeret. Tezzeret took some hits from a Chandra’s Phoenix and was eventually finished off with Shrine of Burning Rage. In the mean time he found me another Myr Superion and a Wurmcoil Engine, and the game ended with me on a healthy 19 life.

Round 2 – James with Zombies

Game 1 – This game was very interesing – at the end of it he had flooded quite badly but had 2 Call to the Grave in play so I couldn’t cast any creatures profitably, so it was a race between my 2 Inkmoth Nexus versus his Diregraf Ghoul and Phyrexian Crusader. If his creatures had been dealing the same kind of damage then I would have died, but luckily for me he died to my poisonous lands first.

Game 2 – This game was quite frankly a mess. We both had Mimic Vats with Wurmcoil Engines imprinted on them, but James had been a bit mana screwed so I was doing too many things a turn for him to recover, even with one Wurmcoil Engine a turn.

Round 3 – Tom with Naya Pod

Game 1 – No Birthing Pod for Tom, and no Heartless Summoning for me. I stabilise with a Wurmcoil Engine and kill Tom with a Tezzeret enhanced Inkmoth Nexus.

Game 2 – I again have a slow start with no Heartless Summoning. My Spellskite meets Ancient Grudge, and I pay 2 life to remove all copies of it from his deck with a Surgical Extraction. Tom doesn’t have his Birthing Pod, but I am unable to draw a removal spell to destroy his Daybreak Ranger who keeps flipping over into Nightfall Predator and fighting my Grand Architects. I keep on playing two spells to flip it back, but he gets to use it in his upkeep each turn then play nothing and I’m back to square one. The massive card advantage and Kessig Wolf Run do me in.

Game 3 – I can’t remember the specifics of this game but my Hearltless Summonings are again hiding from me, and Tom gets his Birthing Pod going, and has 2 Kessig Wolf Runs again. This new land is incredibly good, I respect it even more having now faced it.

Round 4 – Simon with Paladin Equipment

It was pointed out we could draw into the top 4, but Simon looked hesitant.

Game 1 – This game was really epic – Simon managed to get most of his deck out onto the table by drawing a ridiculous number of cards with his Puresteel Paladins while Platinum Emperion stood there making them all useless. Eventually he found his remaining 3 Dispatches to get rid of the 2 Spellskites and Emperion – I’d drawn Tezzeret one turn too late to ultimate him for the win.

Simon asks me how we I.D., I explain and he agrees to give up both a chance to win the badass glass trophy.

Time for some revenge (I hoped…..)

Game 1 – Luck is on Tom’s side for this one, I mulligan into a slow hand and he stamps all over me with a Wurmcoil Engine leaving his Birthing Pod dormant – who needs Elesh Norn?

Game 2 – Luck is on my side, my hand is fine and Tom mulligans to 4. He puts up a reasonable fight as his opener is all lands, Birds of Paradise (I Doom Blade the first one in an attempt to mana screw him) and Avacyn’s Pilgrims. But his Acidic Slime only gets to kill a Spellskite and I kill him with a Wurmcoil Engine.

Game 3 – Now we get to have a proper game, both keeping our opening hands, and boy was it an epic one! He Ancient Grudges something early on, tapping out, and I Surgical Extraction it. This lets me see his hand, which contains Elesh Norn. Then the game becomes all about trying to stop Tom from having enough mana to cast Elesh Norn, by killing mana creatures, imprinting Acidic Slime onto a Mimic Vat and going after a land (I only get one activation and the Mimic Vat is destroyed by a second Acidic Slime).

Eventually Tom gets Elesh Norn into play, but he has been mauled quite badly by a Wurmcoil Engine and is on one life, and my Treasure Mage isn’t even dead because I have a Grand Architect. I top deck my second Mimic Vat, which is about the best thing I could have drawn. I send in the Wurmcoil Engine, he can’t block with Elesh Norn or Phyrexian Metamorph, and is resigned to putting his now 5/5 Golem token in the way. This is also awkward for Tom as it’s now bigger than my Wurmcoil Engine, allowing me to imprint the Wurmcoin onto the Mimc Vat. Tom conceeds.

Game 1 – After almost forgetting I have Heartless Summoning in my deck, it makes an appearance again for the finals. Anthony is soon staring down 2 Myr Superions and 3 Grand Architects – Giant Growth for U anyone?

Game 2 – No fast start for me on this one – I kill and counter some stuff, but he Revoke Existances one of my Wurmcoil engines and a pair of Vault Skirges pumped by Tempered Steel prove to be one fast clock.

Game 3 – One more game to decide who gets the awesome trophy. Anthony is looking nervous and persuades me to split the boosters that are on offer, I’m not that bothered about one booster so I agree. My opening hand is *almost* my god draw – I have 3 Drowned Catacombs, Heartless Summoning, Grand Architect, Treasure Mage and Mental Misstep. It would be nice if my lands were going to come into play untapped, but I definitely keep. Anthony mulligans and doesn’t look happy. My first draw step presents me with an Island, and I proceed to go nuts with a turn 3 Wurmcoil Engine. Anthony attempts to Dispatch it, I pay 2 life and Mental Misstep. Anthony conceeds.

Yay! Cool trophy is mine! 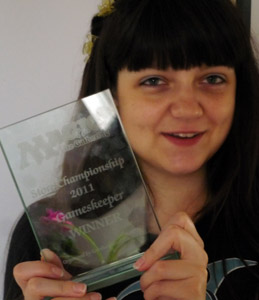 Cyrus Bales - January 28, 2013
0
Recently I went to GP Bilbao, rather than the usual tournament report I would normally do, I’ll instead be recounting several tales of hilarity and bad beats encountered by myself and the other travelling players from the UK. I'll post another article with my decklist later on.