This is my very first blog post.  My name is Laura Dawes, I’m 28, I’m a computer game artist and I live in Oxford, England.  I’ve been thinking of making a blog about my favourite game, Magic: The Gathering, for some time now.  As M12 is being released this weekend it seems like a good time to start.

I’ve been drafting since the original Mirrodin block, so I’m a very experienced drafter, and probably the person my local crew least like to be paired against 😉  Becoming good at drafting seems to me to be a combination of a lot of practice, learning from your mistakes and keeping on top of what others are experiencing the particular format to be like.  For anyone looking to get better at drafting, I highly recommend watching draft walkthroughs on Channelfireball, and listening to the Limited Resources Podcast on Mtgcast.

I’ll be drafting M12 quite a lot in the upcoming weeks as I’ve qualified again this year for the Great British Nationals, and it is the set we’ll be playing for the two drafts in the tournament.  I’m going to attempt to document all of my M12 practice drafts and hope that there are some lessons to be gained from them.  I’ll definitely try to draft as many different archetypes as I can and see how they perform.

So, the first opportunity to draft of course happens at the Prerelease, which was last Sunday for us.  In preperation I’d managed to listen to most of the 3 hour long Limited Resources set reveiw, which was again a good one (although I did disagree on some of the card evaluations, but I won’t get into that now).  The most important observation was that M12 is likely to be a faster format than M11 was.   The reason that M12 is likely to be faster is the return of the bloodthirst mechanic and all of it’s enablers.  Another thing they had said is that the power level of blue seems much weaker than in M11 – but given how powerful blue was in M11 I wasn’t about to avoid drafting it altogether in M12.

The first pick, first pack, first M12 draft – Mind Control is sitting there, asking me to show how awesome blue still can be.  The rare was Druidic Satchel, which looks like a pretty useful and interesting card to me.  But Mind Control effects are always great in limited, especially in core sets where “Bomb” creatures are so powerful.  I was passed some good red cards and blue did not dry up.  I got some very late pick Skywinder Drakes and I opened a Fireball in the 2nd pack.  I ended up with a solid looking pile of removal, creatures with evasion, bloodthirst creatures and a couple of bloodthirst enablers.

I also succumbed to a little bit of silliness during this draft (it was the prerelease after all).  In the middle of the 1st pack I took a Crown of Empires as there was nothing good in the pack, and a bad Icy Manipulator is still an Icy Manipulator.  In the 2nd pack I got a 12th pick Scepter of Empires, and in the 3rd pack I was passed a 3rd pick Throne of Empires!  Was I going to be able to assemble the Empires machine?  Given my Ponder and 2 Merfolk Looters I decided to give it a go!

Here was my finished deck and relevant sideboard cards: 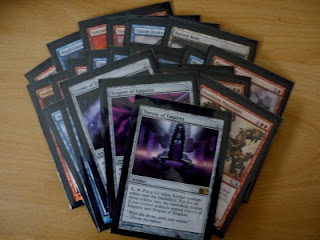 If I wasn’t in a silly prerelease mood I think I would have run the Unsummon and Lava Axe, Fling or Bonebreaker Giant over the Scepter and the Crown of Empires.  I was quite impressed by the rare part of the cycle, Throne of Empires.  It provided a stream of chump blockers on the ground in one game and a little army to attack with in another.  The Crown however was just too expensive to activate and get much use out of (but I think it would be fine in Sealed), and the Scepter – while useful for activating bloodthirst – was just unnecessary.

Pairing bloodthirst with blue was quite interesting – I attacked for 1 damage with a Merfolk Looter a couple of times to power up a Gorehorn Minotaur or Blood Ogre.  It may be stating the obvious, but the Minotaurs are really, really good when bloodthirsted, and are hardly insignificant when not.  A couple of the bloodthirst creatures are really quite miserable if you play them without their bloodthirst counters, which is something I quickly discovered in the sealed deck we’d played earlier in the day.

So, how did the deck do?  Did I manage to assemble the diabolical Empires machine?

In round 1 I played against Anthony’s BW creation.  He had a lot of good cards – Doom Blades, Serra Angel, and his own Throne of Empires too.  I won 2-1, my MVP being Merfolk Looter digging me through my deck to a timely Chandra’s Outrage for the Serra Angel.  Chasm Drake taking a Minotaur for a ride wasn’t bad either.

In round 2 I played against Owen who is an inexperienced player & drafter, but definitely very clever and he’d drafted a pretty strong looking green deck.  I knew he had an Overrun in there as I’d seen him squash Nick with it in the 1st round.  Unfortunately for Owen in the first game I got a fast start with pleanty of removal to two for one him when he enchanted his guys.  I boarded in the second Unsummon due to the enchantments, and apologetically blew him out with one of them when he tried to cast Hunter’s Insight on his Trollhide wearing Garruk’s Companion.  I won 2-0.

In round 3 I faced the mighty Qu.  He is a very good drafter who sadly left Oxford this week so I won’t have the pleasure of playing him again.  He’d drafted a very fast WG deck.  No matter what I did he had the exact answer each time, Pacifism for my blocker, Naturalize for my Mind Control, Mighty Leap to squash another blocker, and Guardian’s Pledge for exactsies.  He crushed me 0-2.  We played a couple of friendlies, I managed to win one when he colour screwed 😉  It seems that the good old 2 drop men and tricks is still a winning formula in this core set.

2-1 isn’t too shabby a start, and I walked home with 3 prize boosters.  It would have been pretty funny if I’d managed to find all of my Empires pieces but the most I ever got in a game was two of them.  It’s not something I recommend trying to draft!

So, my thoughts on the format so far:

– A lot of the bloodthirst creatures are quite below par if you can’t enable their bloodthirstyness.  A bloodthirst deck is likely to be an aggressive deck, and when forced to play defensively this problem is exaggerated.  I think you need to place high priority on good bloodthirst enabling creatures when drafting bloodthirst decks – Goblin Fireslinger, Tormented Soul and Griffin Sentinel all seem to be excellent for this purpose.

– The format does indeed appear to be faster than M11, and I think I will be avoiding spells that cost 7 mana (barring ramping or a very controlling deck).

I hope you have found this interesting and / or useful.  Let me know in the comments if I should go into more detail about the games or the draft in the future.  I hadn’t made notes as I didn’t pre-plan to report the prerelease deck, but I can of course do that next time.

You can also find Lauras blog here, why not stop by and say hello!

Did you enjoy this article? I will get a free Booster Pack for every 20 Facebook Likes this article receives. If you enjoyed what you’ve read then please remember to hit the â€œLikeâ€ button at below. Thank you kindly in advance.

MagicFest London: The Good, The Bad and The Strange by Kirsty McIntyre

Sean Davey - June 6, 2013
0
This time on 'Know Your Limits' Sean takes us through the daunting full block Return to Ravnica draft format. This article is the first in a three part series and focusses on the two colour aggressive decks that were highly popular at Pro Tour Dragon's Maze.