This week, I’d like to talk about a humble 1/2 creature who has become the defining card in the standard environment. Yes, it’s Stoneforge Mystic, one of the greatest two drop creatures to ever grace the game. Stoneforge Mystic is a glorious three part package; the first part is a tutor.

Now, tutor spells that are efficiently costed often find their way to be being broken and banned, Mystical Tutor, Demonic Tutor, Vampiric Tutor, and even Enlightened Tutor spent some time on the banned list. So this little tutor is pretty efficiently costed, but what can it find that’s worth it? In Standard, we have Batterskull, Sword of war and peace and Sword of feast and famine, a pretty potent mix, and in legacy, we get to add Umezawa’s Jitte and Sword of Fire and Ice to the list. Those are some pretty powerful cards to be finding, and by having a tutor, you don’t need a lot of space to include them, and you get to pick the right one for the right time.

The second aspect is the ability to cheat these equipments into play. Normally, a card that cheats things into play is extremely powerful, since it dodges counterspells once up and running and can provide you with the ability to do so at instant speed. Good example of a card that cheat things into play is Sneak Attack but the best parallel here is Aether Vial. Both Stoneforge and Aether Vial allow the player to add things to the board at instant speed whilst avoiding counterspells; however the best thing about Stoneforge is that she makes sure you have exactly what you want to cheat into play already, but what’s even more incredible, is that Stoneforge can make them cheaper. So rather than waiting several turns to power up your vial to drop a bigger guy, your Stoneforge can always do it for two mana, which means things like two mana instant speed Batterskull, clearly very powerful.

Lastly, Stoneforge brings something simple to the mix, her body. As nice as the artwork maybe on the eyes, the body that is significant is in the bottom right corner, with only 1 power and 2 toughness, it’s not exactly formidable, yet it is enough. Because she is not just a tutor, or a cheap way of playing equipment, she also provides you with that first creature to equip whatever you have searched for to. Meaning she is a fine tuneable win condition that grants card advantage, you can choose whether she is a 3/4 with whatever protection she needs, or just a soldier wielding the ultimate Swiss army knife that is Jitte, rounding out the package beautifully.

With all this in mind, it’s easy to see why she hob-knobs with the iconic and powerful two drop creatures in magic history. She has earned herself a spot alongside Tarmogoyf, Dark Confidant, ">Qasali Pridemage and Arcbound Ravager, her presence in Legacy has made her place confirmed, with future equipments only able to reinforce that. 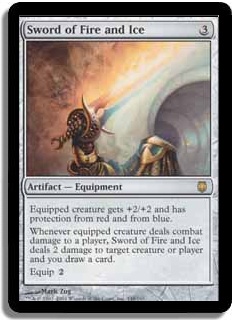 And what of standard? To say she is the dominant force in the format is probably the only accurate way to describe her, with 13 of the top 16 decks from the most recent SCG Open running her, she has lifted the Caw-Blade archetype to the top of the pile, with seemingly no way to shift it. The power level she holds in legacy is high, and when she can do exactly the same in standard, it makes her far too high above the power curve. Recently there was talk about Jace, The Mind Sculptor being looked at in terms of banning, however the real culprit as we can clearly see is this little lady. Whilst Jace makes decks powerful, he facilitates many deck types, whilst Stoneforge just makes one deck far surpass the other. If Jace were to be banned, Caw-Blade would still be the top deck by quite a margin, however if Stoneforge faced the ban-hammer, we’d see a lot more viable archetypes and a more diverse standard metagame indeed. On the 20th of June, the updated Banned and Restricted list announcement goes out, in the current face of results and the skewed metagame, I expect this little white marvel to be retired from standard. But of course, there will always be a place for her in extended and legacy.

Manaleak Gaming Tournament Centre - March 6, 2020
0
Last weekend was a busy one on the competitive Magic scene. Saturday saw a full on day of Standard play, with our morning win-a-box...